Before we start this study I feel I must comment on the bit of awkward translation in verse 5 ‘another type of durable leather’. This replaces the original NIV (1998) translation ‘hides of sea cows’ (other translations have skins of: badger, seal, porpoise, goat, manatee, or fine or beaded leather). The problem is that as the term is only used in similar verses in Exodus and Numbers the correct translation is uncertain, so it seems the NIV have now decided to simply use the new phrase.


Sea cows (or the freshwater variety, manatee), refers to the dugong which lived (among many other places) in the shallow coastal waters of the Red Sea. They are air-breathing mammals, 8-10 feet long, and eat sea grass. They are slow-moving and easily caught, and have been hunted for their meat, oil and skin. Because they are so easy to catch, and in part due to coastal pollution and loss of sea-grass meadows, some colonies are now close to extinction and are listed as an endangered species. 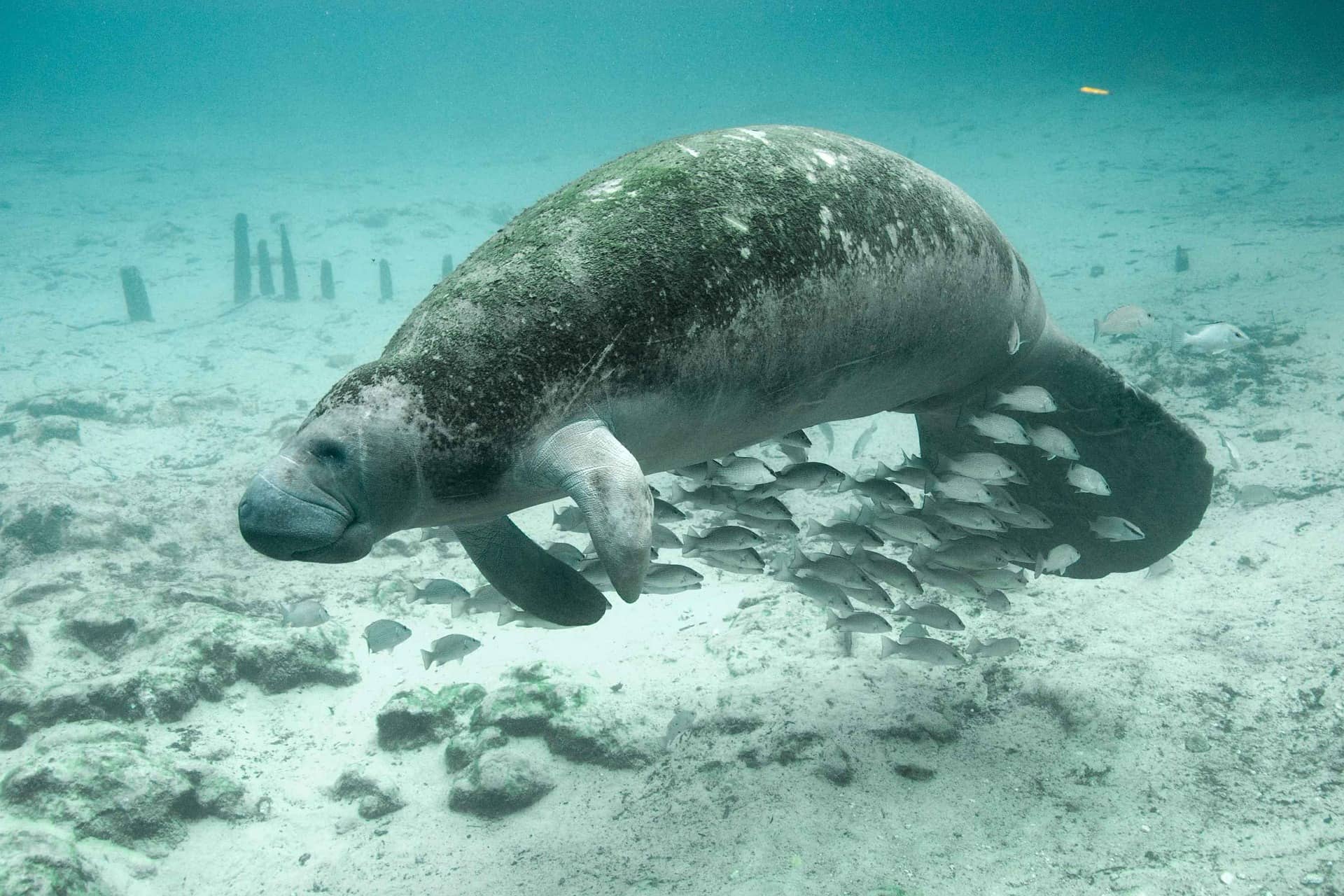 Now we are to discover another reason why God called Moses into his presence. He has detailed instructions to pass on concerning the way he is prepared to meet with his people in future.

This and the next six chapters will describe the Tabernacle and rules concerning it and some of the verses we will simply read with little comment.


1 The Lord said to Moses, 2 ‘Tell the Israelites to bring me an offering. You are to receive the offering for me from everyone whose heart prompts them to give.


God is not interested in ordering his people to give. But he is always happy to receive gifts from those of his people who wish to give. Here he had a purpose for asking for gifts, he had very specific requirements and he spells out what he needs:


3 These are the offerings you are to receive from them: gold, silver and bronze; 4 blue, purple and scarlet yarn and fine linen; goat hair; 5 ram skins dyed red and another type of durable leather; acacia wood; 6 olive oil for the light; spices for the anointing oil and for the fragrant incense; 7 and onyx stones and other gems to be mounted on the ephod and breastpiece.


Moses must have wondered what this ‘shopping list’ was for, and what was ‘the ephod and breastpiece’? (This was the first mention of these priestly articles in the Bible. So far priests had not yet been appointed, but later when Moses wrote this down he would of course have understood.)


8 ‘Then let them make a sanctuary for me, and I will dwell among them. 9 Make this tabernacle and all its furnishings exactly like the pattern I will show you.


Now it begins to make sense. Moses is to build a specific tent (Tabernacle) for God to dwell in, and furnish it as God directs. The first item of furniture, and perhaps the most important, was the ark.


11 Overlay it with pure gold, both inside and out, and make a gold moulding around it. 12 Cast four gold rings for it and fasten them to its four feet, with two rings on one side and two rings on the other. 13 Then make poles of acacia wood and overlay them with gold. 14 Insert the poles into the rings on the sides of the ark to carry it. 15 The poles are to remain in the rings of this ark; they are not to be removed. 16 Then put in the ark the tablets of the covenant law, which I will give you.


The ark was to be a most sacred object – no-one must touch it. The carrying poles were long and must remain in place, so that those whose were chosen to carry it could keep their distance at all times.


Cherubim had only been mentioned once before in the Bible in Genesis 3:24 but nowhere are they described in great detail. Generally they are described as powerful agents of God, with wings, hands, feet, and faces. People have often depicted them as composites made up from men, oxen, lions, and eagles.


‘The Ark of the Covenant’ was the box containing the two stones that had been engraved by God. I don’t find it helpful to try to imagine God using it as a throne to sit on, but rather that the glory of the presence of God would appear above it.


23 ‘Make a table of acacia wood – two cubits long, a cubit wide and a cubit and a half high. 24 Overlay it with pure gold and make a gold moulding around it. 25 Also make around it a rim a handbreadth wide and put a gold moulding on the rim. 26 Make four gold rings for the table and fasten them to the four corners, where the four legs are. 27 The rings are to be close to the rim to hold the poles used in carrying the table. 28 Make the poles of acacia wood, overlay them with gold and carry the table with them. 29 And make its plates and dishes of pure gold, as well as its pitchers and bowls for the pouring out of offerings. 30 Put the bread of the Presence on this table to be before me at all times.


So far there are only hints as to how the table and its plates, dishes, pitchers and bowls will be used, but obviously it will figure in future offering ceremonies. Here too is a tantalising first mention of the ‘Bread of the Presence’ – but so far, no explanation.


Now Moses is instructed to make the lampstand. It was to have a central lamp with three branches each side. These were to be cup shaped lamps to hold oil with wicks – known today as a menorah. 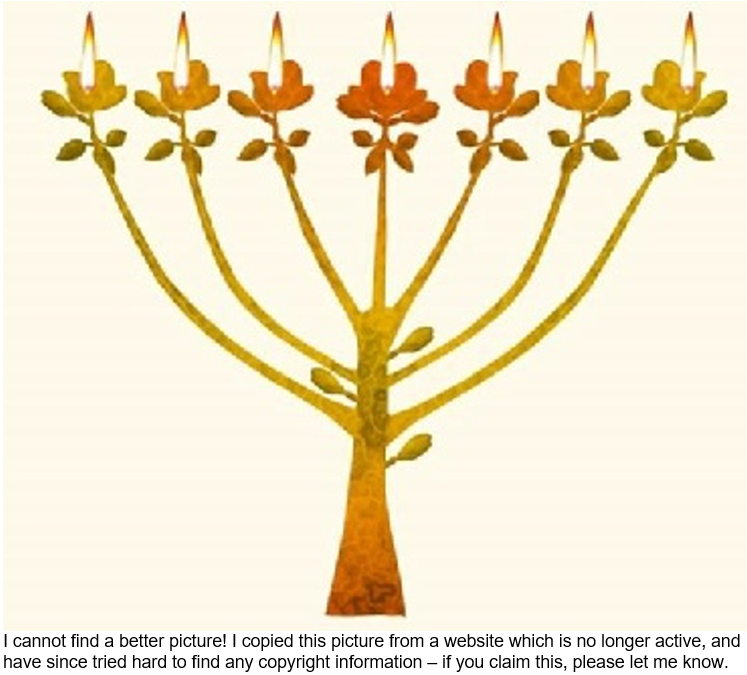 31 ‘Make a lampstand of pure gold. Hammer out its base and shaft, and make its flowerlike cups, buds and blossoms of one piece with them. 32 Six branches are to extend from the sides of the lampstand – three on one side and three on the other

37 ‘Then make its seven lamps and set them up on it so that they light the space in front of it. 38 Its wick trimmers and trays are to be of pure gold. 39 A talent of pure gold is to be used for the lampstand and all these accessories.


It is thought that a talent of gold would have weighed between 25 and 34 kilograms: 55 to 75 pounds.


40 See that you make them according to the pattern shown you on the mountain.


A reminder, if Moses needed it, that this was to be to God’s design – not Man’s. So often we try to ‘improve’ on what God has planned, thinking that somehow, we must know better.