Now we move on to the Tabernacle itself

1 ‘Make the tabernacle with ten curtains of finely twisted linen and blue, purple and scarlet yarn, with cherubim woven into them by a skilled worker. 2 All the curtains are to be the same size – twenty-eight cubits long and four cubits wide.


Because the description of the Tabernacle starts with the curtains it could appear that is was a low, flimsy structure, but it was actually a very big affair, and quite solid. So we will start this study in verse 15 and come back to the curtains later.


15 ‘Make upright frames of acacia wood for the tabernacle.

The word ‘frames’ have also been translated boards, and the frames could have been covered in thinner timber. (Solid boards this size would have been extremely heavy to carry). Most English translations use the word frame and we’ll see why that’s probably correct when we look at the curtains.

(However in nearly all the pictures I have found the artists have depicted these as solid panels – perhaps each taking their lead from pictures they have seen!)


They were amazingly large. Assuming that as in the previous chapter, the cubit was roughly 0.5 metre or 1½ft, the frames were about 5 metres or 15ft long by 75cm or 2¼ft, and each frame was to stand on end.

16 Each frame is to be ten cubits long and a cubit and a half wide, 17 with two projections set parallel to each other. Make all the frames of the tabernacle in this way.


We will see in verse 19 that the ‘two projections’ must have been at the bottom to fit into the silver bases.


To stop the wooden panels from falling over, rings were attached and wooden crossbars inserted along the whole length of the sides. Every part made of timber was then to be covered in gold.


30 ‘Set up the tabernacle according to the plan shown you on the mountain.

It is interesting that Solomon’s temple was exactly twice the size of the Tabernacle.

Obviously God showed Moses a lot more detail than he recorded in his book!


Now we can return to verse 1


1 ‘Make the tabernacle with ten curtains of finely twisted linen and blue, purple and scarlet yarn, with cherubim woven into them by a skilled worker. 2 All the curtains are to be the same size – twenty-eight cubits long and four cubits wide. 3 Join five of the curtains together, and do the same with the other five. 4 Make loops of blue material along the edge of the end curtain in one set, and do the same with the end curtain in the other set. 5 Make fifty loops on one curtain and fifty loops on the end curtain of the other set, with the loops opposite each other. 6 Then make fifty gold clasps and use them to fasten the curtains together so that the tabernacle is a unit.


There was sufficient linen curtain to cover the whole structure, hanging down each side but not quite touching the ground.


As we will see, that was then covered by a slightly larger curtain made of woven goat hair (just visible at the base of the linen curtain.


So the curtain would not have been visible at all from the outside; it could only have been seen from inside the tabernacle, it was for God’s eyes – and those of the priests.

For those inside it may have looked like this. Had the frames been solid panels the sides of the curtain would not have been visible at all – only the ceiling, although it is possible that the curtain was attached in such a way that it hung down inside the frames – but again we are not told.


7 ‘Make curtains of goat hair for the tent over the tabernacle – eleven altogether. 8 All eleven curtains are to be the same size – thirty cubits long and four cubits wide. 9 Join five of the curtains together into one set and the other six into another set. Fold the sixth curtain double at the front of the tent. 10 Make fifty loops along the edge of the end curtain in one set and also along the edge of the end curtain in the other set. 11 Then make fifty bronze clasps and put them in the loops to fasten the tent together as a unit. 12 As for the additional length of the tent curtains, the half curtain that is left over is to hang down at the rear of the tabernacle. 13 The tent curtains will be a cubit longer on both sides; what is left will hang over the sides of the tabernacle so as to cover it.


Goat hair cloth was the traditional material for Bedouin tents and was a fairly thick material; these days goat hair is commonly used for make-up brushes, or woven as rugs. This curtain would have been heavy, and would have needed great care to unroll over a 5m (15ft) high structure.


Because of the weights of the coverings, some have suggested that there must have been rafters or tent poles to stop the centre sagging, but none are mentioned. (But for a people of tent-dwellers that may simply have been assumed). Or perhaps the crossbars mentioned were to have been from side to side, again to act as rafters, but the text doesn’t really support that.


Now the whole structure had a double layer of leather, again the first layer of goatskin would have been fine thin leather, rather than the final outer covering of thicker coarser material (Dugong skin – see introduction to the previous study) which would have been weatherproof.

Now we move inside the Tabernacle:

31 ‘Make a curtain of blue, purple and scarlet yarn and finely twisted linen, with cherubim woven into it by a skilled worker. 32 Hang it with gold hooks on four posts of acacia wood overlaid with gold and standing on four silver bases. 33 Hang the curtain from the clasps and place the ark of the covenant law behind the curtain. The curtain will separate the Holy Place from the Most Holy Place.


The ‘Holy of Holies’ was sectioned off at the far end by this curtain, and was a square, 5x5metres (15x15feet)


34 Put the atonement cover on the ark of the covenant law in the Most Holy Place. 35 Place the table outside the curtain on the north side of the tabernacle and put the lampstand opposite it on the south side.


These (Exodus 25), together with the incense altar (Exodus 30:1-10), were the only items of furniture inside the Tabernacle. The Lampstand and the Table were taken to Rome after the destruction of the Temple in AD70 and are depicted there on a panel on the Arch of Titus. (Search Google images)


36 ‘For the entrance to the tent make a curtain of blue, purple and scarlet yarn and finely twisted linen – the work of an embroiderer. 37 Make gold hooks for this curtain and five posts of acacia wood overlaid with gold. And cast five bronze bases for them.

Again there is no detail as to how the priests were to enter past the curtain.


Without being disrespectful, if you have in mind a barbeque it will help to picture the altar:


Many have tried to draw the altar – this is one interpretation. 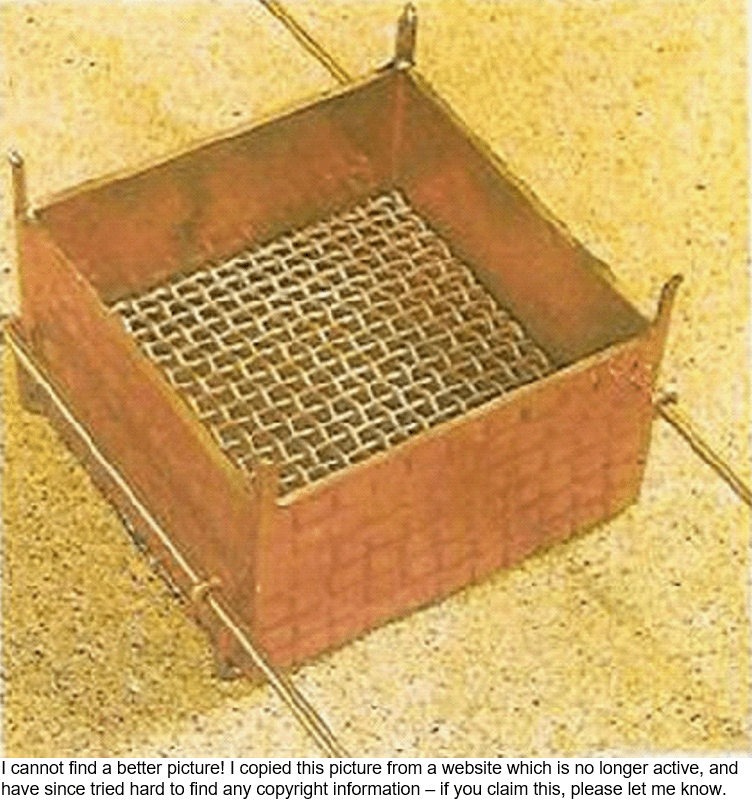 5 Put it under the ledge of the altar so that it is halfway up the altar. 6 Make poles of acacia wood for the altar and overlay them with bronze. 7 The poles are to be inserted into the rings so they will be on two sides of the altar when it is carried. 8 Make the altar hollow, out of boards. It is to be made just as you were shown on the mountain.


Obviously there needed to be a way to access the ashes with shovels, and we don’t know if the firepans were on top of the grating or under it.


So we see that the wood was on the grating, and the sacrifices on that. The ashes would fall through and could then be removed from below.


16 ‘For the entrance to the courtyard, provide a curtain twenty cubits long, of blue, purple and scarlet yarn and finely twisted linen – the work of an embroiderer – with four posts and four bases. 17 All the posts around the courtyard are to have silver bands and hooks, and bronze bases. 18 The courtyard shall be a hundred cubits long and fifty cubits wide, with curtains of finely twisted linen five cubits high, and with bronze bases.

19 All the other articles used in the service of the tabernacle, whatever their function, including all the tent pegs for it and those for the courtyard, are to be of bronze.


We need to stop for a moment and look at some of the materials specified for God’s dwelling with man. Some picture the ancient peoples as ignorant peasants – but in reality they were highly intelligent and skilled craftsmen and women. It is true they had been slaves in Egypt, but slaves who were capable of building and making amazing structures and artefacts. The contents found in Egyptian tombs amaze us! The weaving of flax into linen had been established since the beginnings of history, and skilled wood and metal workers, although limited by their tools, produced articles of great beauty and technical brilliance.


Now all their skills were to be put to use to construct a building which was to be portable, yet a worthy dwelling-place for Almighty God.


Everything was to be of the highest quality –

3 These are the offerings you are to receive from them: gold, silver and bronze; 4 blue, purple and scarlet yarn and fine linen; goat hair; 5 ram skins dyed red and another type of durable leather; acacia wood; 6 olive oil for the light; spices for the anointing oil and for the fragrant incense; 7 and onyx stones and other gems to be mounted on the ephod and breastpiece.


Many of these materials had been given to the Israelites as they left Egypt: ‘The Israelites did as Moses instructed and asked the Egyptians for articles of silver and gold and for clothing. The Lord had made the Egyptians favourably disposed towards the people, and they gave them what they asked for; so they plundered the Egyptians’ (Exodus 12:35-36).


It was these items that the people were now willing to offer to God (25:1-7)


20 ‘Command the Israelites to bring you clear oil of pressed olives for the light so that the lamps may be kept burning. 21 In the tent of meeting, outside the curtain that shields the ark of the covenant law, Aaron and his sons are to keep the lamps burning before the Lord from evening till morning. This is to be a lasting ordinance among the Israelites for the generations to come.

With the lamp out what could you see?

Would you have had to take an extra lamp in with you?

Inside the Holy of Holies, would it have been darker still?

And Exodus 25:22 ‘There, above the cover between the two cherubim that are over the ark of the covenant law, I will meet with you’


The Holy of Holies was where God revealed himself, and no-one but God was allowed in – except for a chosen priest, once a year, on the ‘Day of Atonement’ (Leviticus 16).