Hold the timeline dowel, don’t put it down yet.


Remember from last time that this represents the earth from start to finish?


When God was creating the Earth, did he know what would happen to it? Before he created people did he know they would turn against him?

Did he know where it would all end?

(Obviously the answers are ‘yes’ but it is to get people thinking about God’s qualities. He is all-knowing; he is outside of Earth-time. Because of his love for created mankind he knew he would have to send his son to die for us.)


So far in our last study we covered the first three verses of Genesis and looked at the creation of the Heavens, the Earth and Light. (Show day 1 on dowel).


The flat end at the beginning represents the days of creation. Those who prefer the universe to be 4.54 billion years will need a longer stick. How much longer?

Actually on this scale it would have to be longer by 335 miles. Now, if we were God, would we consider that to really be necessary? (Put it down now.)

1 In the beginning God created the heavens and the earth. 2 Now the earth was formless and empty, darkness was over the surface of the deep, and the Spirit of God was hovering over the waters.

3 And God said, ‘Let there be light,’ and there was light.


In our previous study we had got as far as verse 3. We recognised that creating light first might be a problem to some – but verses 4 and 5 now compound the problem.


So it appears that God must have started the Earth spinning to give us day and night. Otherwise, what causes planets and stars to spin (and they all do)? The accepted scientific explanation is that the cloud of material they were made from was already spinning! And that as extra material joined the planet or star, it hit it at an angle that helped the spin!


What is this ‘cloud of material’?

Where did it come from?

Was it still subatomic particles or had they all grouped together to make atoms?

Or had they already made recognisable chemical elements or had some of these combined into compounds?

How did they choose to form?

What decides if they are a gas, or a liquid, or solid?

What made them spin?

Back to our spinning cloud – actually, half the material hitting a spinning object should slow down its spin – it just depends where it hits. Also material arriving at a spinning object (bottom arrow) at the same speed as it rotates will have no effect, whereas material arriving and opposing the spin will have a considerable effect (top arrow). So the net effect should be to slow it down!

Interestingly, we are told that the spin of each planet and star is vital to the working of the Universe. It would not be able to exist if everything was stationary. Also, if objects started spinning, centrifugal force would send bits of them flying off into space, so God made gravity too!

Gravity is a force that two objects with mass exert on each other simply because they have mass. It can be measured:


But that still doesn’t explain what it is or how it works.


(Einstein eventually decided it wasn’t a force at all – rather it was a ‘warping of spacetime’ but I’m not going there! Currently no one knows what gravity actually is.)


(In order for the universe to expand – and the rate of expansion is gradually accelerating, a fudge had to be applied to the theory of relativity to counteract gravity: the ‘Cosmological constant’.

Now, because of gravity the earth would adopt the shape of a ball, and it was covered in water.

6 And God said, ‘Let there be a vault between the waters to separate water from water.’ 7 So God made the vault and separated the water under the vault from the water above it. And it was so. 8 God called the vault ‘sky’. And there was evening, and there was morning – the second day.


One idea is that God took some of the water that covered the Earth and put it in a canopy or shell round the Earth! Could that conceivably be possible?

It is physically possible. Today there are many satellites in orbit round the Earth at various distances. Geostationary (or Geosynchronous) satellites are roughly 22,236 miles above the Earth (The Earth’s diameter is about 7,926 miles, 24,901 miles circumference).


So a bubble of water could totally enclose the Earth like a greenhouse roof and if it were where these satellites are, 1km of water at the Earth’s surface would form a canopy 16meters thick (although it would probably be frozen solid. Jupiter’s rings contain much frozen water)


Another idea is that it was simply absorbed into the air that God had also made. It is estimated that currently there is 3,100 cubic miles of water contained in the atmosphere. When air cools the water becomes visible in the form of clouds. The warmer the air, the more it can hold. So if the air temperature of the early Earth was greater than today, it could have held a lot more.


Presumably the molten core of the Earth would also have been hotter then too.


What affect that may have had on the temperature and humidity of the Earth can only be a guess, but the fossil evidence seems to point to a more tropical rainforest environment.


Note that in Genesis 9:13-14 we read that rainbows had not been seen until after the flood, so presumably there was no rain until then.

8 God called the vault ‘sky’. And there was evening, and there was morning – the second day.


People have tried to discover what we should understand by the terms Sky, and Vault (or Expanse). We see from this verse that they are actually the same thing! To non-scientific people the sky is anything above the Earth. The word for Heaven is not used until Genesis 14:19


9 And God said, ‘Let the water under the sky be gathered to one place, and let dry ground appear.’ And it was so. 10 God called the dry ground ‘land’, and the gathered waters he called ‘seas’. And God saw that it was good.


Verse 9 suggests that the continents were originally together, not to be broken up until the time of the flood. Recent geological discoveries have shown similar rocks on the Atlantic coastline in Africa and Brazil. Current thinking is that there was an original land mass (called Pangea) that could have looked something like this: 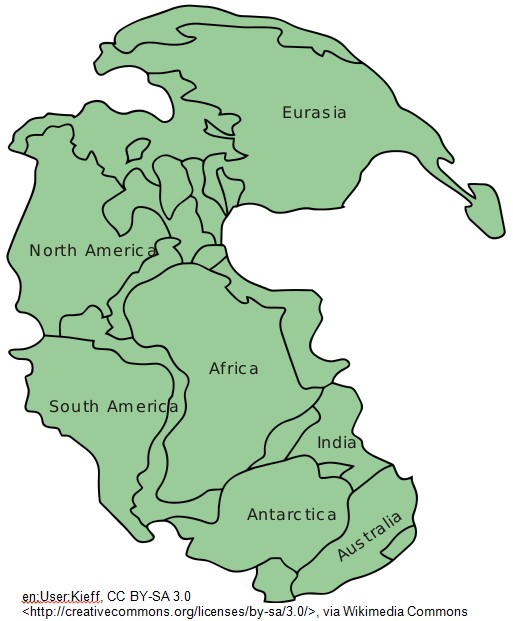 
Obviously scooping some of the Earth’s crust to one place could easily (!) provide this – and from now on the Earth would no longer be flat. Note that at each step God inspects the creation, and declares it to be good

Remember, the Earth then was the only thing in the Universe. We now come to the creation of the first living matter. And we are specifically told that this was plants and trees bearing seeds. And they were to grow on the land, not in the oceans. It also answers the old question ‘What came first, the chicken or the egg’ or in this case: ‘the plant or the seed?’ It is obvious, the plant came first, but containing in it the DNA necessary to produce seeds.


Until the flood there would be no sedimentary rocks, or sand, or soil. Only igneous rocks making up the lithosphere (the hard outer layer of the Earth) so what soil was there to grow plants in? Or did they need soil at all? Many commercial greenhouses today grow plants hydroponically (just in water).


Or perhaps they also grew in rocks like pumice stone, which is a sponge-like volcanic rock. Pumice has been used as an artificial soil in horticulture.

‘After the explosion of Krakatoa, rafts of pumice drifted through the Pacific Ocean for up to 20 years. In 1979, 1984 and 2006, underwater volcanic eruptions near Tonga created large pumice rafts, some as large as 30 kilometres that floated hundreds of kilometres to Fiji (Wikipedia)’


Or actually it could have been anything that God chose! Remember – he is God and cannot be limited.


But plants are designed to need heat and light in order to grow, so:


Only now will the sun be needed. The sun fixed at exactly the right distance from the Earth so that the heat arriving from the sun would allow life to flourish. And without the moon, we would have no tides. (Some people might have a problem with light taking a long time to reach us from a sun 93 million miles away – but at 186,000 miles per second it would only take 8 minutes!)


And the throwaway line at the end of verse 16: He also made the stars. As if it had to be put in somewhere, but wasn’t terribly important! Here the time taken for light to reach the world would be a lot longer – unless God decided that as he was creating it, it would arrive when he chose.


So we get to the end of the fourth day and Heaven and Earth are beginning to look recognisable. No animals, fish or humans yet, but the plants are growing – possibly at an amazing rate in the ‘Greenhouse Effect’ of those early days. Or simply at the speed that God decided! And if they were created with an appearance of age, i.e. fully mature, that too was up to God.


We must always remember that as we try to describe what happened at creation, we are in danger of constraining God to ways and methods known to our limited minds. We constantly need to wonder at the immensity of the power and ability of our amazing God until we run out of superlatives!


I have to say that as I read the first verses of Genesis I am reminded of the words of the Captain of the Star Ship Enterprise, when having discussed the best course of action with his officers, he simply said ‘Make it so’ and verses

As simple as that!


We will close this study by remembering Psalm 19v1:

The heavens declare the glory of God; the skies proclaim the work of his hands.