Put the timeline dowel in the centre of the room as before.

We need this timeline just to remind ourselves just how small we are, and how big God is.

11 Then God said, ‘Let the land produce vegetation: seed-bearing plants and trees on the land that bear fruit with seed in it, according to their various kinds.’ And it was so.


20 And God said, ‘Let the water teem with living creatures, and let birds fly above the earth across the vault of the sky.’


31 God saw all that he had made, and it was very good. And there was evening, and there was morning – the sixth day.


Well you either believe that God created every living thing in the space of a few days, or you don’t. Some believe in Theistic Evolution: believing that although God created, he used Evolution to produce everything we see today.


Immediately to my mind then come some more questions:

Could God have created everything exactly as recorded in Genesis?


If the answer to that is no, what is limiting God who is actually all-powerful?

Did God need to use evolution?

‘let the land produce living creatures according to their kinds, and after 387,492,871 attempts God finally made a mouse that worked. And he said it was quite good, but he could probably improve it a bit.’


But seriously, of all the difficulties I have with the Theory of Evolution, the greatest has to be with the whole subject of DNA. Every truly living organism has to have DNA, however small and ‘primitive’ it may be. Not only is this DNA used to maintain each cell, but it also contains the blueprint of the organism (the simplest of which are probably bacteria cells), in order that as it reproduces it creates an exact replica of the original.


But not only does it need the DNA blueprint, this simplest of cells also needs a mechanism to decipher the incredibly complex code that it contains. This could be imagined as a computer program, which can read the data contained in the sequences of DNA and then instruct each part of the cell to grow exactly as specified. And so far I have not found any satisfactory explanation of how that works, let alone how it could have evolved in order for the first cell to reproduce.


The more I look into this single topic, with its incredible complexity of protein synthesis, and the fact that DNA also has its own inbuilt maintenance and repair mechanisms which are carried out automatically and continually, I can only conclude that there has to have been a designer.


Before we leave this topic I should point out that within DNA is the provision for adapting to circumstances. It is possible to selectively breed more successful forms such as farm animals, crops, domestic animals or plants. This is not evolution but selection; the data for each of these variations is contained in the genes, but no data exists to change into another type – wheat is still wheat, dogs are still dogs. 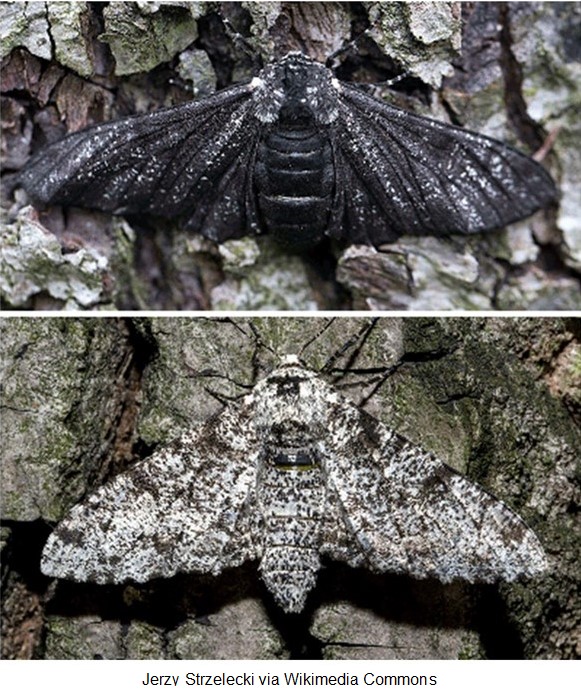 Evolution is said to work by the ‘Survival of the fittest’.

The Peppered Moth mimicked the colour of the light grey lichens on its roost trees. Rarely a few dark forms existed.


During the Industrial Revolution dark forms were gradually ‘selected out’ to merge with smoke blackened trees. (Actually, because light versions were easily seen they were eaten). Since smoky factories have become a thing of the past, the lichens have become light again and so have the surviving moths.

So we return to Creation:

How long did God need in Man-Time to produce all living things? Or did he take as long as he needed in God-Eternity, and then said ‘let it be so’?


I can only take a view that as God is God, that is just what he did.


But something else was also needed and for this we return to verse 2 where we read:

the Spirit of God was hovering over the waters


The Holy Spirit was present at creation to breathe life into all living things.

In our first study we asked the question ‘What is life’? And found that no-one has an answer. Can we ask instead: Where does life come from?


The Bible tells us it is the work of the Holy Spirit to give and sustain life.

In wisdom you made them all; the earth is full of your creatures.

29b When you take away their breath, they die and return to the dust.

30 When you send your Spirit, they are created,

and you renew the face of the earth.

14 If it were his intention and he withdrew his spirit and breath,

26 Then God said, ‘Let us make mankind in our image, in our likeness, so that they may rule over the fish in the sea and the birds in the sky, over the livestock and all the wild animals, and over all the creatures that move along the ground.’


28 God blessed them and said to them, ‘Be fruitful and increase in number; fill the earth and subdue it. Rule over the fish in the sea and the birds in the sky and over every living creature that moves on the ground.’

29 Then God said, ‘I give you every seed-bearing plant on the face of the whole earth and every tree that has fruit with seed in it. They will be yours for food.

30 And to all the beasts of the earth and all the birds in the sky and all the creatures that move along the ground – everything that has the breath of life in it – I give every green plant for food.’ And it was so.

31 God saw all that he had made, and it was very good. And there was evening, and there was morning – the sixth day.


This is what it had all been for. But why should God want to create Mankind?

(Man = Adam in Hebrew, but referring to the whole human race: Adamkind!)

and to the south, “Do not hold them back.”

Bring my sons from afar

and my daughters from the ends of the earth –

7 everyone who is called by my name,

whom I created for my glory,

whom I formed and made.’


We were created for God’s glory, and our purpose in life is: whatever you do, do it all for the glory of God (1 Corinthians 10:31)

4 For he chose us in him before the creation of the world to be holy and blameless in his sight. In love 5 he predestined us for adoption to sonship through Jesus Christ, in accordance with his pleasure and will – 6 to the praise of his glorious grace, which he has freely given us in the One he loves.

(We will start to look at being chosen or predestined in our next study.)


So men (and women) were finally created, but there was something different about them – what was that?

They were made in the image, in the likeness of God. What does that mean? (Remember that this was before the fall.)


(Does it help to remember that Christ is the image of the invisible God, the firstborn over all creation? (Colossians 1:15) The whole idea that man somehow carries the 'image of God' is not easy to grasp but the more aspects of God’s nature that we discover, the more we can appreciate how we were originally created.)


Perhaps here we should mention that God’s original design of a perfect world with sinless people ‘holy and blameless in his sight’ was derailed when Adam and Eve effectively said to God ‘I want to do what I want to do; I don’t want to do what you want me to do’.


With sin came corruption and death. (We will cover this in much more detail in study 7). But it also brought separation from God.


Through the death and resurrection of Jesus, the barrier of sin has been removed and the relationship with God can be restored.


Now all who believe and accept Jesus as their Lord and Saviour have been declared righteous (Justified) and we are being changed back to our original condition ‘holy and blameless in his sight’ (Sanctified). (Ephesians 1:4 above)


(Read the next three scriptures)

we all, who with unveiled faces contemplate the Lord’s glory, are being transformed into his image with ever-increasing glory, which comes from the Lord, who is the Spirit.

we are predestined to be conformed to the image of his Son,

we know that when Christ appears we shall be like him, for we shall see him as he is.


If you are interested in the whole DNA question, I recommend that you look online for


I found the following website useful for looking into basic DNA:

If you prefer an Evolutionary view:

A suggested timeline of a 4.5 billion year old Earth, with approximate dates:

- 570 million years of arthropods (ancestors of insects, arachnids and crustaceans),

- 500 million years of fish and proto-amphibians,

- 400 million years of insects and seeds,

- 65 million years since the non-avian dinosaurs died out,

- 2.5 million years since the appearance of the genus Homo,